2009, missing post #23: before the tide, a turn (faithless: insomnia cover by milk inc, sylver and lasgo) 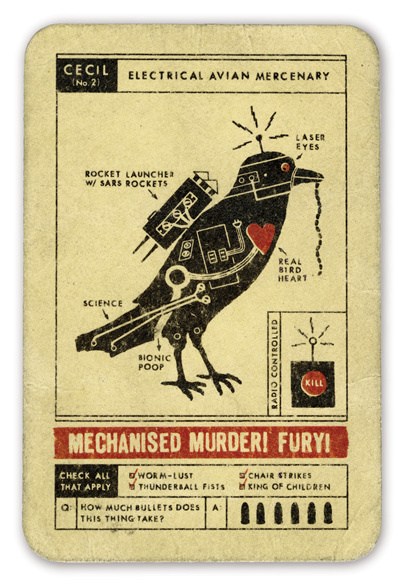 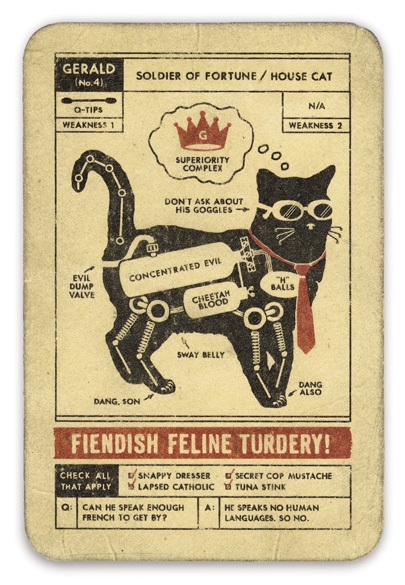 Next time you see a seemingly ordinary house cat or backyard crow, consider Ryan Abegglen's mechanical beasts. These robotic soldiers of fortune are outfitted with an amusing array of abilities, from cheetah-blood powered combustion engines to explosive turd bombs. (ryan abegglen via io9( 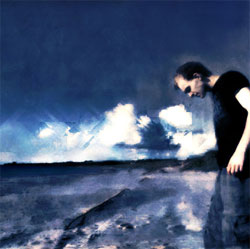 You must surely remember Veqtor from the London edition of The Dose and his weird, distorted ways of cochlear communication, halfway between jazz thinking, glitch and 8-bit tunes. Now he's got his new album, Parsuitel Orbitelum out for free download out on his label, OXO Unlimited and if you want to say goodbye to 2009 with insane chiptunes (Preprocessor is my fave but the beginning AG Racing is not halfbad for an 8-bit GTA cover song, either!), download the whole pack! I'd say Definite is the best-rolling song of all and anything's that's gone acidways needs some work on it, let those tracks be more strict, the basslines more tense, the wickedness is there already. Oh and those missing The Dose - we're there to promise you lovely little things in 2010. If we get there. (Below, a collaboration of Veqtor and Mathtiiaas Rosén, using a crappy cellphone, upsampled using geniune fractals, then run through max/msp+jitter patch. Stock footage from archive.org has been run through an atari2600 emulator being data-bent and repositioning the footage. Still rocking stuff, though!)

One of the new tracks by the accomplished German occult industrial/EBM group yelworC. Make friends with them, emerge in the depths. 2010 is bringing you more of those very sweet pits of modular destruction and despair. Order all the stuff you can get from them, their older materials were released on Celtic Circle Productions, the newer ones via Minuswelt Musikfabrik. All recommended. (And here's something older as well.)

Daybreakers, a new vampire movie comes out next week. Bloodsuckers are the new tad and they're a bit overplayed by now after True Blood, New Moon and all their kin but then again I might just be jealous of the imminent success I didn't have a direct role in. But anyways. Daybreakers capitalizes on an old idea of David S. Goyer that didn't make it into Blade III: vampires walk the face of the Earth and humanity's the sorry-ass minority until the inevitable logistics hell breaks loose: blood farms can't really cope up with the population needs and they need to find a cure, fast. Not quite sure about how this ties into the otherwise evident problem of the energy/oil/resource crisis, but anyways. It has Willem Defoe with crossbows. You don't really need anything for the first week of the new, luckier 2010. 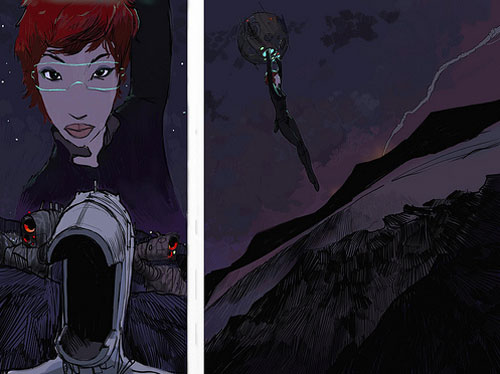 Visualize a world without peace or justice. Visualize the business plot (1938) overthrowing FDR and installing a capito-fascist cabinet. Visualize the corporate wars (2050-2080) wiping the USA off the map with its own military-industrial complex. Visualize Entropica, a plot to murder God by three monotheist religions. Visualize two brothers, born from a medical cybernetic experiment on the effects of torture and human suffering. Visualize Man-Machine, destined to unleash a blind fury on the world. Visualize his brother, I-7the fourth prophet, spreadin a gospel of war among the machine-intelligence. THE MAN-MACHINE EPIC tells the story of their conflict... (via fightevilwithevil)

Not forgetting you either, rrooyyccee. Read his online cyberpunk comics at fightevilwithevil.com and enhance it with the related blog as well. It is actually quite good, lost in a triangle somewhere between Nawlz, moody French comics and Blame!.

Part The Winter Market, part Metropolis.. and you know the rest. Lady Gaga's new photo shoot with David Lachapelle - grab the rest here on the updated mashkulture link, including Tesla punishment coils and - how to effectively and cartoonishly fall out of a wheelchair. (M1k3y believes I triggered some malware alert with the celebritysmackblog link.) 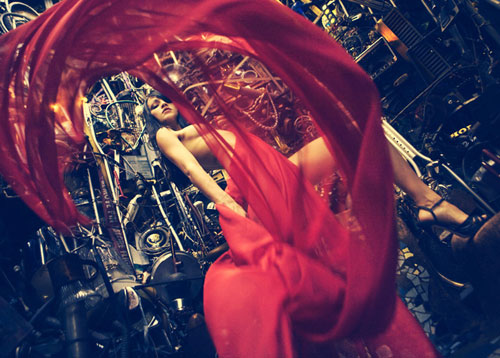 This film covers a bit from the Caldari-Gallente war. It's set 200 years ago, before any of the 4 races had pod technology. I tried to use ships that may have been around back then, though sadly there's not a huge amount of information that I could find. (via youtube)

Do not think you're nothing. Quite a feat for Google Translate, innit? That's the title for Manyar I. Parwani's short film set in the Matrix universe - basically a re-enactment of the scene where Neo meets Morpheus for the first time. Without any working knowledge of Dansk, I can only compliment at the visual quality and the cuts and at that point I'm surely sinking. Good thing is, Parwani's already been working on a new project, Klar Til Optagelse (Ready to Record) - the casting was previously public and it was obviously Quiet Earth who broke the news to the world - about Denmark's biggest public casting endeavour yet. Below is the brief talk about what Parwani felt obligatory to say about the whole process.

I've sort of grown to like this DHC Meinhof, a Polish digital hardcore band on D-Trash Records, but the nicest I could tell you about them is that they're a shameless rip-off of Atari Teenage Riot. Which is not exactly a bad thing after all - after the tragic departure of Carl Crack you either went for the slightly (or significantly) different stuff of Alec, Hanin and Nic or you've tried to find something more harsh and less professional in the digital hardcore scene. So the Meinhof ends up in a gapfilling position, however bad this sounds. For them. (You don't think so? Oh. Check Will You Ever Learn.) 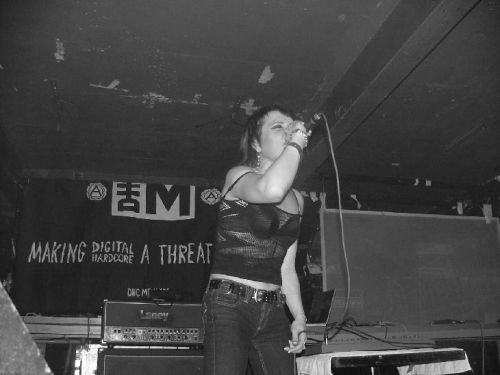 And if you missed out some comets just like I did, time for you to know - The Shizit has a new album out called The Shizit - downloadable free of charge from archive.org! (Thanks to Gargaj for the then-lifesaving link!)

Too bad I found The Shamen only on the very last week of this year (apart from their very, very bad live recordings such as this one) - turns out they have more connections to cyberpunk and my time spent online than I remembered. Hyperreal, one of their 1990 singles, apparently gave birth to hyperreal.org, a long-lived site formed around music, chemistry and rave culture and their Axis Mutatis album (from 1995) actually gave its name to a cyberpunk community site (sort of) that serves a different Japanese site now under the same domain. (For more cyberpunk digital communities, check Project Cyberpunk and its links.)

2009, missing post #7: captain power and the soldiers of the future

It was 1987 and I was an eight-year old kid with an extra schedule in his life, one I took more seriously than brushing the teeth, cleaning the shoes and go to sleep at nine. It was waking up at six to get the best futuristic show available at that time (apart from Aeon Flux, of course): Captain Power and the Soldiers of the Future. It is so oldschool you should all play this in the background today, let it seep back to your already exhausted brainmeat. As for the show - you can all grab the episodes on public video sites here and here or you could just order them right at captainpower.com.

Just when I thought I wouldn't need to buy another Xbox360 game before Mass Effect 2.

AntiVJ has been working on a new format for French retro-futurist electronic producers Principles of Geometry. Using stereoscopy (technology used in IMAX cinemas to watch visuals with 3D glasses) they produced a 50min long real-time journey through space. An exciting experience and a real visual counterpart to the band's space/epic soundtrack. (via antivj, music at myspace/principlesofgeometry)

You've heard the physicists speculate on parallel universes, space travel, and time travel. Now come and hear a physicist interview the real experts in these subjects: a bestselling science fiction writer and pioneer of virtual reality discuss what you get when you look at science through fiction. Featuring Lee Smolin, Jaron Lanier and Neal Stephenson. (via q2cfestival.com)

BioWare has based at least two of the characters in Dragon Age: Origins on real-life attractive women (....) According to Maxim, the two "real life hotties" Alleykatze Alex Stein and Victoria Johnson have "lent their sexy curves to their video game counterparts" in Dragon Age: Origins, giving you something to think about during loading screens or just before bedtime or really whenever you feel like it. And Maxim has exclusive shots of all this real life hottieness. (via maxim via kotaku)

Dig up some more info on Alleykatze on Model Mayhem, MySpace, Zivity or Twitter.

2009, missing post #2: openland, on the verge of the comtemplative sway

Quote, Openland is a reflective docufiction loosely guided by issues surrounding micro states and its derivative definitions, unquote. Directed by Patrick Defasten Doan, music by Andrew Coleman. Through intertwining interviews, meta-narratives, and digital landscapes, Openland unfurls a dialogue between consciousness, individuality, and collectivity. If the two trailers here in this post left you craving for more, do check out some extra footage in Defasten's vimeo stream or bite into his Flickr stream.

DEFASTEN believes in remodernist ideals and the nihilist difference of our alleged unified society. In the future, the alphabet does not exist.

Focusing on digital animation, DEFASTEN delineates parallels within information, space, and the urban landscape at the intersection of digital media practices. This direction reflects an interest in the fragmentation of media, contemporary society, and the post-modern condition.

it's not the air i'm breathing, it's my life escaping
openland.ca

Beardyman, one of the world's best - if not the outright best - beatboxer on his 2008 Northern tour. (via hardergeneration, on a magical triple-nine date)

on the upcoming warhammer 40000: ultramarines movie

Gapfiller numero obscuro for you on the eve of the new decade (well, almost). This very piece of news has been circulating inside the tabletop scene and the space marine afficionado sects alike: Warhammer 40K is finally getting the movie treatment. The movie entitled ULTRAMARINES (read about the Ultramarines space marine chapter here) is done by Codex Pictures (the ones who did Bionicle) under the guidance of Games Workshop: so far faithfulness to the original source material is one of the most emphasized points of all official statements. According to the newsblips, Ultramarines: The Movie is helmed by a relatively noname director, Martyn Pick - on the other hand, the script is worked on by one of the greatest names in the literary WH40K universe, Dan Abnett.

This direct-to-DVD movie is quite obscure at the moment, the most important things are eventually published on the official movie site, such as the concept art below for the Codex Chapel Entrance. I am not completely won over and after watching the Bionicle trailers, I'd sacrifice half my friends' kidneys in Tibetan incense rituals (or anything to that effect) to get Square Enix/Square into the production chair. 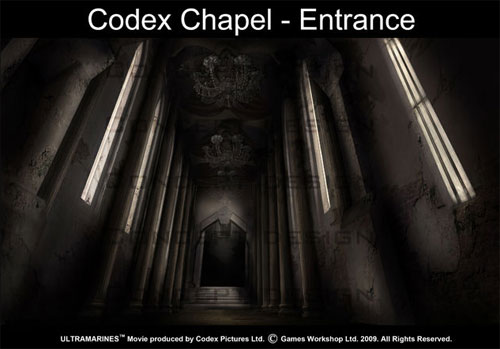 To soothe the hours (days, years) of waiting, here's something relevant to keep you on your toes, a THQ-developed action-RPG entitled Space Marine - with a trailer.