Zola Jesus is Nika Roza Danilova, an opera-trained caterwauler from Madison, Wisconsin who makes noise music that scrapes and glistens in equal measure. She loves Ian Curtis and Lydia Lunch, and their uncompromising tendencies can be heard throughout her bruising, beautiful recent album, The Spoils. (...) (She's also a member of Former Ghosts, the latest project from This Song Is a Mess But So Am I's Freddy Ruppert, which also involves Xiu Xiu's Jamie Stewart.) (zola jesus myspace, via pitchfork, image via hplusson) 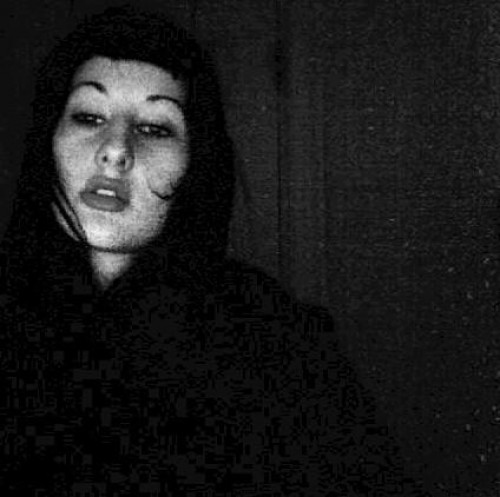 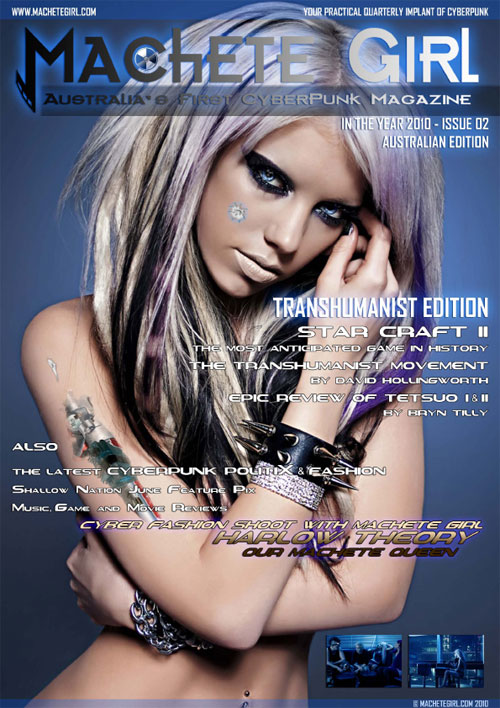 Australian cyberpunk in the spotlight again! A PDF zine with two free issues to download, MACHETE GIRL is a good up-and-coming project with a good eye for urban girl eyecandy and fashion and all the first/second generation cyberpunk themes - this second issue (above) is taking a dive into transhumanism, for example - and even if they barely scratch the surface, they surely offer articles that will make interested readers dig deeper. Being a zine editor myself, I can only congratulate them for the stuff they do - making a countercultural zine is always very fun and very hard at the same time. But the effort is there. Appreciate the effort and download Machete Girl. Did I mention they have nice dailykawaii ladies? (machetegirl.com)

dose energy drink: look what the kat dragged in 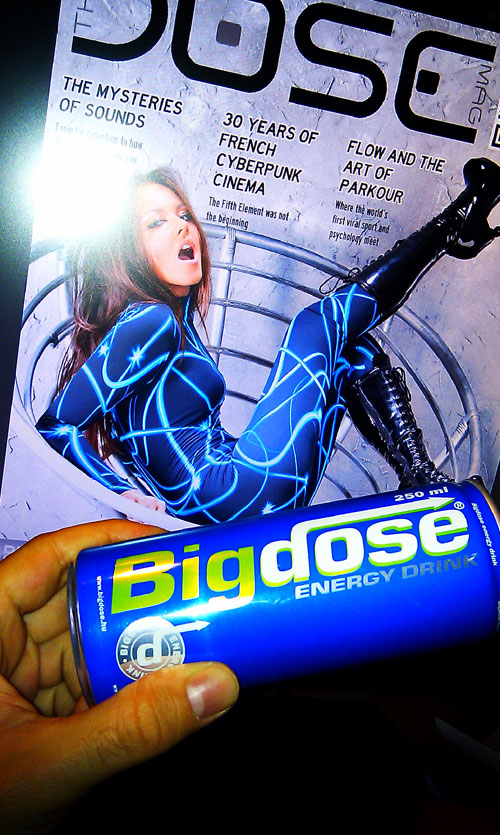 Look what the kat dragged in: our newest find in the shop, [big dose] energy drink, colorharmonizing with the latest cover. And by the way, buy our latest issue for 4 euros and get lots of hints about Parisian (and French) alternative and counterculture, all in gonzo. (www.thedosemag.com) 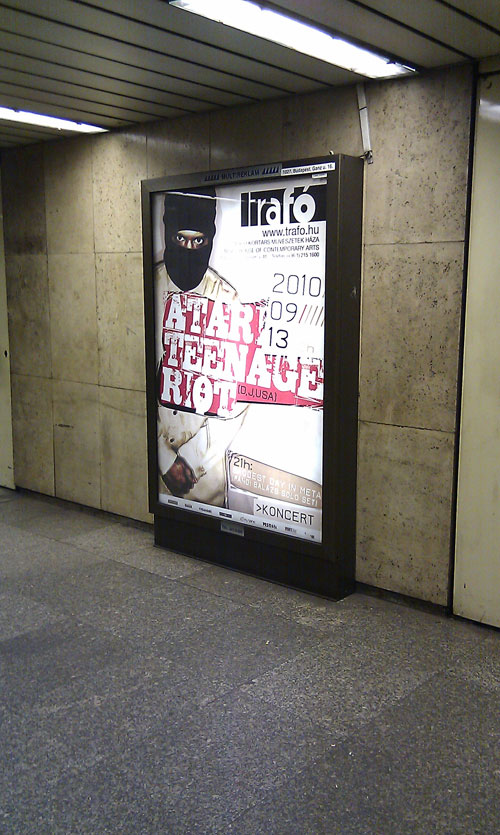 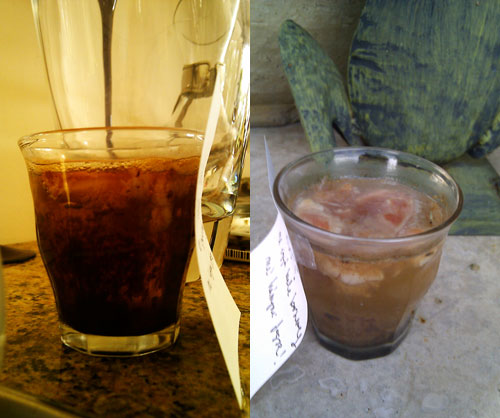 planetdamage: the 22 most important albums of my life

This is a 22/31 and yet without any Tarot references, a slightly unprepared, yet a mundanely complete take on the current "what are your fifteen favourite albums" on Facebook. A bitch of a task, if you ask me. I had a hell of a lot more important albums and even a lot more significant ones, apparently these quizzes are not for those who consume music. But these are the first to come to mind. The next similar post will have Tarot references. Inside: a list and video embeds.
END_OF_DOCUMENT_TOKEN_TO_BE_REPLACED 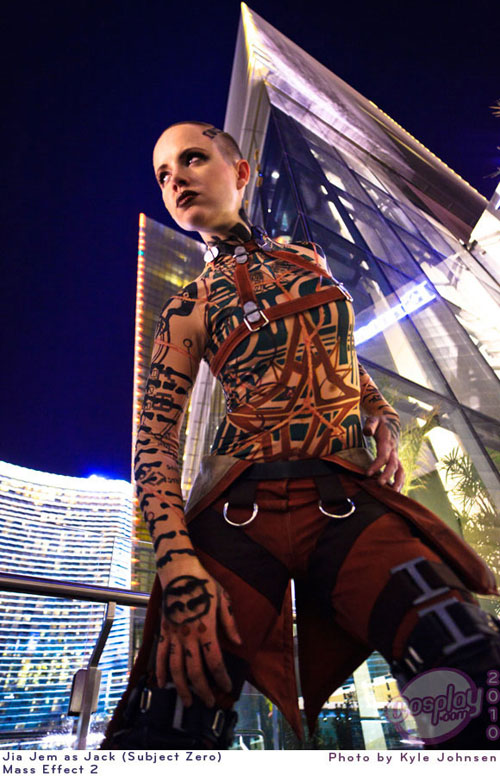 Jack, resident whackjob of the SSV Normandy, portrayed wonderfully by Jia Crens. There's a level of dedication here that borders on the fanatical. In a good way. See, Jia not only models in the shots here, but also made the costume (it's a flesh-coloured bodysuit, not ink-on-flesh) and, most amazingly, even submitted herself to the barber's clippers, going so far as to have Jack's hair "design" shaved into her scalp. (jiajem.com via kotaku)

At this weekend London Electronic Festival (LED) Aphex Twin used live facial recognition to map the audience and overlay images of his own, trademark distorted face. Mesmerising and disturbing in equal measure! (at nerdcore via dangerous minds) 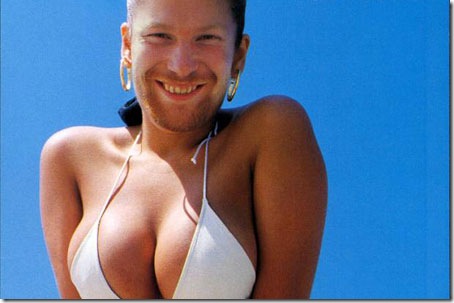 Caprica will resume the second half of its first season in January 2011, alongside the return of Stargate Universe. The exact premiere dates are to be announced. Following long-established practice, however, a new trailer for Caprica's season 1.5 is already out. It made its debut at Comic-Con to much excitement. (via scifi.about.com)

And this, I believe is part of paying a tribute to the late master of Japanese animation, Satoshi Kon, who passed away two days ago, 24th of August, 2010. What Kawanimation (check their Vimeo pool) did with their almost seven minutes is an hommage to Satoshi Kon's anime itself - watch and enjoy. It has bits of juvenile drama in it and how Yannick, the young protagonist tries to initiate a score on a young lady. With devastating results. The image comes from the blog of creator Maxime Paccalet. And while you're at it, check user elchoupi on YouTube, he has amazing pieces of French animation among his uploads. 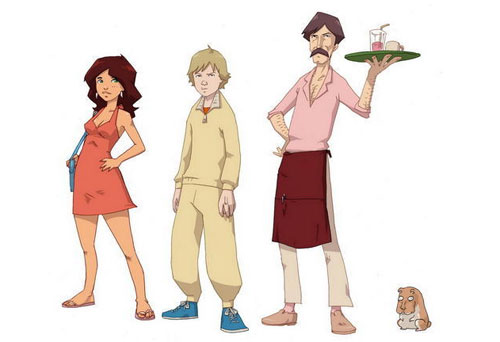 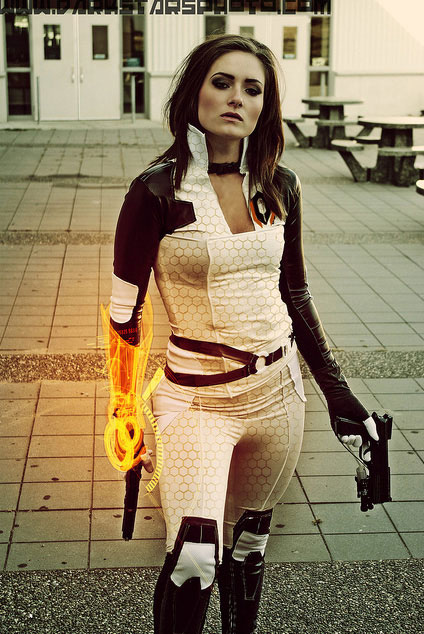 Sure, she's no Yvonne Strahovski, the actual actress behind Mass Effect 2's Miranda Lawson, but Polish model Jessika F is doing a pretty good job nonetheless in this cosplay photo shoot. Put together by Dark Stars Photography, this is a great shoot. And I'm not talking about the lady clad in spandex. I'm talking about the effort that's gone into the role-play, the photoshopped combat and even the fact they found a location that looks like somewhere Miranda and Commander Shepard could actually share a quiet lunch. (Miranda Cosplay, via kotaku) 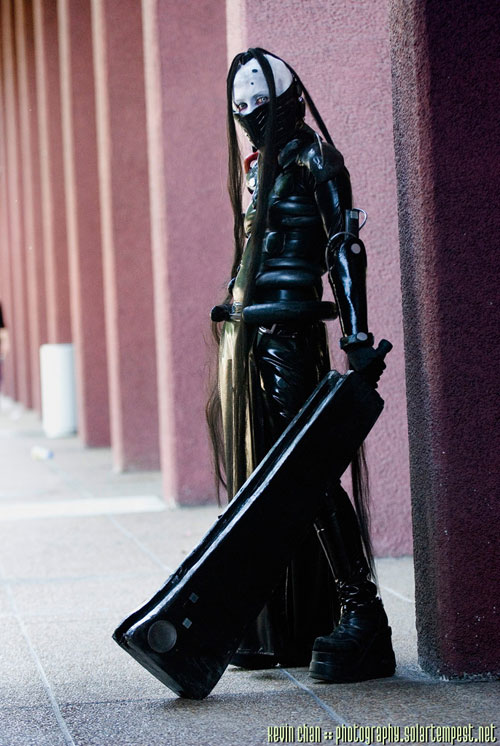 My costume from Anime North last month. Ivy from Blame! the manga. This was a difficult costume to create, and I'm damn proud of myself for doing it. The photo taken by Solartempest. You can see the entire set under the cosplay section. (This comes from hexreedfly.deviantart.com and is recommended by The One Who Always Has Zillion Links Of Rock, >@honeymooncroon) 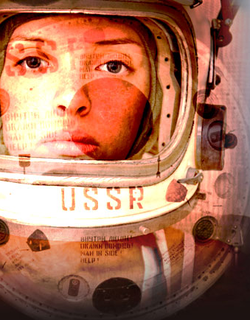 Pioneer One is the latest project from Josh Bernhard and Bracey Smith whose previous indie feature The Lionshare, became VODO's biggest success to date with over 450,000 downloads since its release. The success of the project inspired the writer/director duo to develop this quality drama in collaboration with VODO and its distribution partners. With a successful distribution of the pilot they're hunting for the donors and sponsors that will make the continuation of the show possible.
The show's pilot was shot for just $6000, raised through the micro-funding platform Kickstarter. "This production was possible due in no small part to the willingness of talented, professional people working for free," explains Bernhard. "From actors to composers, they did this because they believed in the project and wanted to see it happen.The production was a journey in and of itself. Check out the video blogs that were posted to the web that tell the story from script to finished episode": vimeo.com/channels/pioneerone. (pioneer one @ vodo.net, via warrenellis.com)

SYNOPSIS
An object in the sky spreads radiation over North America. Fearing terrorism, U.S. Homeland Security agents are dispatched to investigate and contain the damage. What they discover will have implications for the entire world.

summer 2010: firing up the kickstart gun 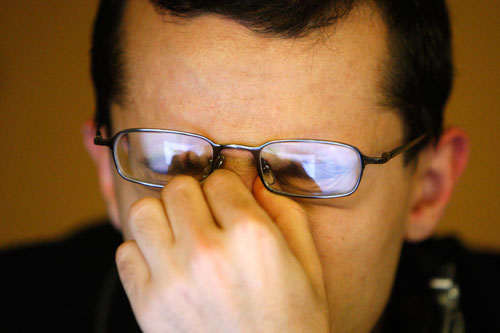 I'm a sentient coffeemug cosplay. Japanese kissa with hand-painted Final Fantasy VII walls, past 6pm, quite the morning for my circadian cycle turned nocturnal and everybody around me is talking con con con as I'm wrapping my lips, nostrils, eyelids and headskin on the coffeemug, inhaling as much poison as possible to kickstart my brain into deviliciousity and fuckyou. I think I've also been appointed a co-editor for the Mondo mag now, turning the magazine concept inside out into more pages of gonzo, sarcasm and smiling cobra hate than I originally planned. So there's this guy who sells these neon sticks they use at parties for waving around and we could even get some from him real cheap and you know, we could do anything, says my chief editor, a real nice guy with a shrug that translates into Absolute Party Helplessness, not really hellbent on glowsticks, though, apparently. Stop right there, I tell him, I will have a hundred of those. There is confused silence first, then, confused laughter. Tension breaks. We are all a family now with The Jester making his first move in half an hour after fiddling around with his telephone, setting up the kissa on Foursquare and talking to everyone about the midnight havoc. Fuck you all, this was serious. I need a hundred. Blue and red. And then there is confused silence again. 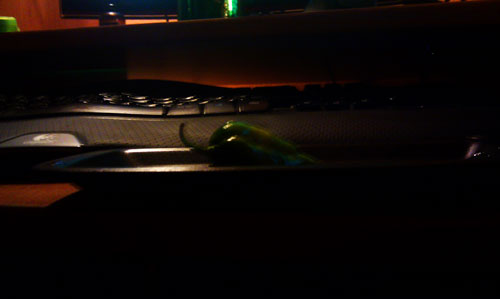 Well, yes. This is part of the Lesser Experiment, the one about tolerance, generally known throughout the world as Naga or Bhut Jolokia. It is evil and green and the three green points have a careful touch of symbolism and hidden meaning and whatnot. It also might have a few things to do with the HTC Desire's phone settings but hey, don't ruin the mood. We cut the first millimeterful of jolokia meat off the top and halved it with Mr. Biopunk. Uvula came back functioning in 10-15 minutes. Washed the paprika heat between nail and fingermeat, finger lost sensation for about 26 hours. Very potent. Cut bigger slices into food, because I felt bored. I wasn't bored for three days afterwards. Note: for any taste, must try chipotle next time.

For those who miss longer articles here, trust me, so do I. I'm writing long articles and reviews into The Dose (in English) and Mondo (in Hungarian) and the rest of the useful brain activity goes into reading up on all the stuff I've been neglecting in the past months (yes, yes, Vonnegut's Slapstick is the first in line, Neal Stephenson's Anathem is still on the table with age-old stuff by Robert Anton Wilson, Brian Greene, James George Frazer and even Katalin Barath's debut novel is here, because she writes so impressively in 140 characters on Twitter, I'm curious what she can do in 250 pages) and also, reading up on all that stuff I'll be teaching from September about media awareness, viral marketing, transhumanism and all that. But more about that later to keep you at a steady forty percent, guessing. And there is time spent at the midnight havocs. Join our midnight havoc.

And as a parting message.

So rickrolling is not funny anymore? Here's a new, slightly eerie Crysis version, as reported by Kotaku, recommended to all the 'channers. When I found the link early in the morning, the idea of me posting it here looked magnificent. I do not take the effort to doubt myself now. No no. No way in hell. 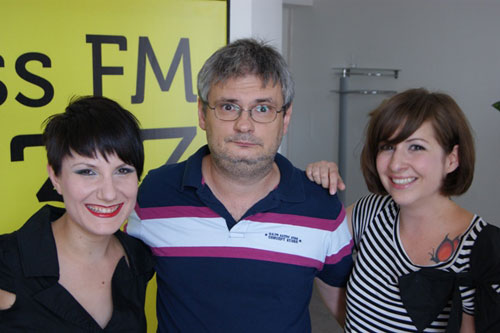 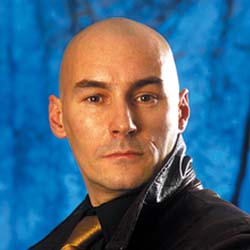 So where do you get your healthy dose of fiction, really. The really inspirational, mindful stuff. Stuff that the nineties threw at us in large, hypnotic, swirling chunks, Liquid Television, Disinfo Nation, Hyperreal, Mondo 2000, Chris Carter's take on the alien conspiracy theories, anything that questioned your life around you and made you rethink your original ideas, shifted the focus of your associations into something completely different. William Gibson and Neal Stephenson were obviously inspirations back in the days, but even the lightning bolt brilliance of cyberpunk wore out after a time. And then came comics and it's interesting to note that all artists that ended up as household names are UK residents: Alan Moore, Warren Ellis or the newly re-found object of interest, Grant Morrison. And when they've successfully re-forged your interests, your way of seeing things and your wallet after finally directing all the Amazon shipments your way, it just turns out that all those artists have a huge interest in something we call magic. Or the way of manipulating reality. Which is a very interesting and multi-faceted subject. But we won't get into magic this time, we get into the joyful news of two documentaries being in the works - about Warren Ellis and Grant Morrison. Without further comments, check the trailers and shiver with glee. For more info, check out Sequart.org. 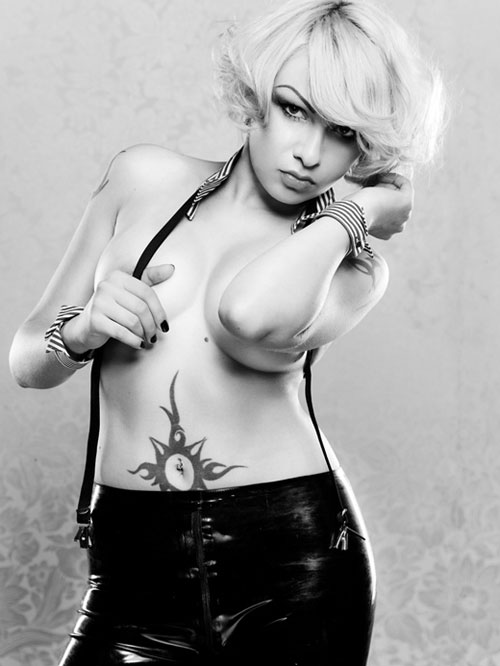 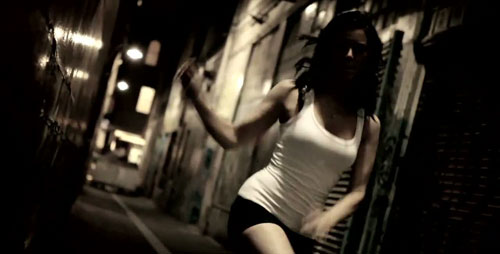 and that was the evolution of our concept and then Eris came and we saw it got bad and way out of hand, 6C 3C KP

a post-apocalyptic highway to hell: dominator 2010 official after movie

this is french music in infographics 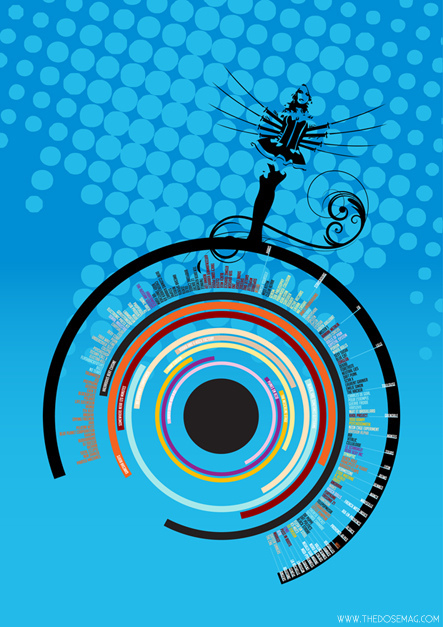 ...and then compiling all the Parisian and French bands that we love and came to love during the past months seemed like a good idea. The highly asymmetric feral claws katanamaid above with all the categorization is the handiwork of Livia @livililli Varga and she has done some highly contagious ROCK to begin with. Until the next issue of The Dose is out this year (and we are already pinging several cities throughout the globe to see where we should spawn next), check out her stuff on Flickr and order our PDF mag on French pop culture, because it's damn cheap for 4 euros and even Warren Ellis himself recommended that and in the eyes of a geek that is some sacred feedback.