The compulsory closure blog post a.k.a. what happened in 2011? A whole lot of good stuff and you’ve read the public ones in the August diary post. Still, no word about Skyrim? And all the best music finds? (Because you don’t read my monthly music rants in Mondo?) How is that even possible? Worry not. This is the time. Friends, fans, stalkers and haters – this was the year 2011!

THE BEST MUSIC TO COME ACROSS IN 2011

2011 was clearly a year of change in musical interest: out went hardstyle (although Budapest shuddered in dread when we went for zoneruns listening to Headhunterz’s Hard With Style podcast) and back came deathrock/Goth/pop noir, space ambient and dark ambient/ritual music. And I managed to form a heartfelt devotion to Annie Mac’s Friday night shows on BBC Radio 1. Clearly fell in love with the pop noir of The Good Natured, flirted with the likes of King Midas Sound and Shackleton, found out that the most interesting things this year were released on Tympanik Audio and most of the great music I’ve found I also channeled into the Razor Coated Candies video compilations. 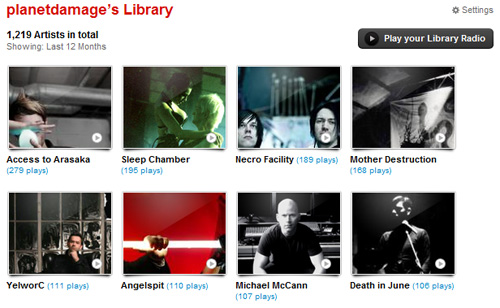 AND FINALLY…
I’d love to send out extra flying kudos and thankyous to my faithful blog readers who’ve sent me ideas and links and whatnot to keep this blog alive when attention was elsewhere: Dawe_, Honeymooncroon, Jenny Quantum, Kolosthemanwithoutfacebook, Riplakoidase, Tobal and Miss Toyclouds, the DAKINI OF ROCK.

I’m wishing you all a Happy New Year and whatnot. There will be great and amazing things (all of them black and neon and having wheels!) happening in 2012. And I will be responsible for quite a lot of them.