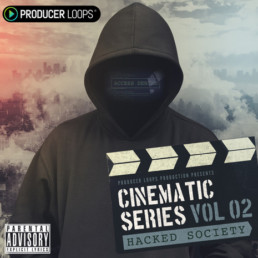 There's a fair amount of sample packs conveying tough-ass industrial pounding or subtle microglitches trickling down your spine, but this one pack definitely stands out from the crowd that has CYBERPUNK written all over it. Lhasa Mencur's pack aptly named Cinematic Series Vol 2.:Hacked Society is in the smack middle of a fight between Deus Ex and Mr. Robot - and thankfully, neither of those are winning. (Or both. This is the grim future. I don't actually know which scenario's better.)

The pack is under half a gig (available formats are Ableton Live!, Acid Loops, Apple Loops/Aiff, MIDI, WAV), containing digi one-shots (perfect for setting the mood with sweepy bleeps and hi-freq sequences), effects (mostly those that you would hear in a hacker den, without the coffee machine sounds, the pizza cutters and anything porn-related, I love the typing sounds to bits) and vocal phrases - these are the samples that people more often than not mistake for speech samples from the otherwise brilliant cyberpunk series Mr. Robot. (I'm actually using one of these samples on my track 'The Mark' on my new EP that's dropping tomorrow, but what you need to check out is a remix done by Lhasa himself that features more of his brilliant samples - I'll update this review as the link goes public.)

Another surprising bit is a set of 8 construction kits, all of which scream "I should be on the new Deus Ex soundtrack!" And they should be. The demos made out of all these bits do have one major flaw, though: I want to buy Lhasa's album made for an imaginary cyberpunk game and he still hasn't done it and these demos are the worst best teasers ever. Until he finally comes to his senses and makes an urban cyberpunk glitch-ambient album with an Asian influence, grab this baby and try to make the best of it. Because, even if the sounds do not connect with your project, it will definitely motivate you into making something better.

Overall, both the effects and the vocals reflect just a fair amount of urban grit, just enough dirt to get you knee-deep in Kowloon but all the construction kit elements give you just enough shine through the windowpanes to forget about all that urban decay. In any case, this is a solid library.