TL;DR Get this and let it grow in your head. If it feels out of place, that’s good, you’ll appreciate the little details in due time.

This is not neon. This is blue and grey, far from the strobe lights – this is the dark corner at the partyplace behind the big granite column where you find the entrance to another hall, the DJs playing on high-end gears and the decoration looks all Zaha Hadid but there are windowglasses on the walls that look like human skin, screeching and lighting up when you touch them. This is what Architect’s Neon EP feels like. More like blacklight. 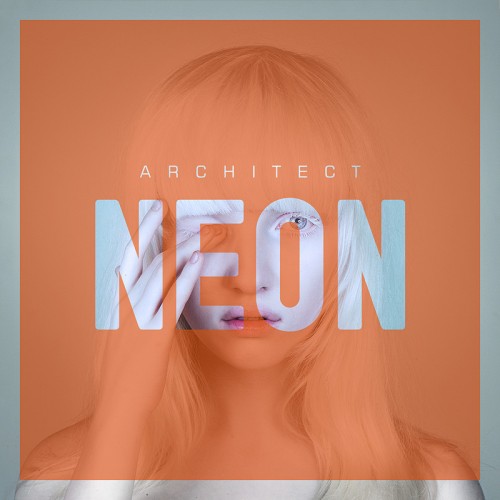 Short story long: Daniel Myer’s stuff has always been really influential on how I got the be the future-eating bastard that I am and I’m coming from the camp where his albums Solutions for a Small Planet & Vertical Theory are GOD. So the title track Neon obviously hit a hearty-warm note, not only because of its typical Haujobbish feel of Automatic Jack jury-rigging technology from the spare parts of a holodeck, two unlicensed guns, diminished chords and manly sadness (if this doesn’t ring any bells, go read William Gibson’s short story Burning Chrome NOW), but also because it features the vocals of Black Nail Cabaret frontmistress Emke who I have the pleasure of knowing and calling her a great influence. All in all, a match made in heaven!

This EP smashes this track face first into the brick wall of complete reinterpretation. Frank Riggio‘s version is a violin-filled dramatic catharsis, Erich Zann-style, a soundtrack version of a memory – 5AM, Berlin, waiting for the airport U-Bahn as you see people trying to cope with morning and life in general. Phracture‘s tom- and mid-filled glitchy beat take is how you swoosh out to the airport, seeing the world outside gain speed. And sticking to this memory, Basementgrrr‘s version is the first coffee, with sub-drone guitars and a rocky feel, operating with tension, yet never doing a chorus touchdown that would calm you. Standing on the top of Burj Dubai, pondering on how to jump – horizontal or vertical? (Yep, remixes are tricky pills. Adore these pills.) Normotone’s take would be the frantic rush through Schönefeld to get to your plane, calculating every parkour trick pre-realtime. If you thought Mirror’s Edge would be a fake endorphin rush, I really dare you to try this. Solid, rigid beats, even bouncier than the club version.

Be prepared for more beats – there’s a Niels Binias version of Hummingbird (Kruder & Dorfmeister-y chillout on hermit hash) and two versions of Snow – Denny Engler‘s clubby take for night rides (especially loving the filtered pianos) and a 3rd drift version, which sounds a lot like how Cleaner (a slightly more cyberpunkish version of Haujobb) would sound nowadays, consider this a soundtrack for a Finnish drone strike under a steel sky.