Classic first-generation cyberpunk’s been having a mild comeback: the new episode of Deus Ex (best aspect: music), the relaunch of the Shadowrun universe, the remake of Total Recall (best aspect: music), the renewed plans for the movie adaptation of Neuromancer (no words from the four-minute trailer screened at the American Film Market 2013 event), the live-action version of Ghost in the Shell (and the new OVA called Arise), the script for Blade Runner 2.. moviewise it’s all coming together nicely.

The Robocop franchise is also under rehash – and the second trailer for the movie (screening from Feb 14th, 2014) sports a few great ideas about market penetration and the creative brainstorm (however much I might loathe the word). How do you introduce a robotic father figure into a robophobic society? By human sacrifice, of course. How can you chip off all those splinters of disinterest or hostility? José Padilha will show you how. (And it’s going to come in black.) 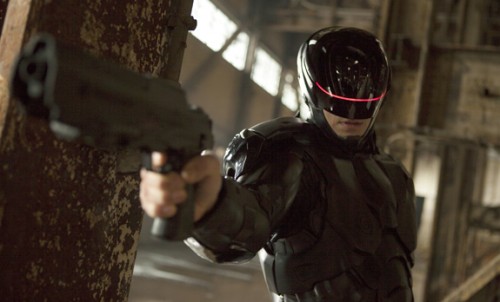