The Irish art director used Cinema 4D and Vray to mimic the fighting moves of Street Fighter characters – specifically Ken, Chun Li, Ryu and Blanka – while turning their bodies into abstractions of colour and form. Each character is easily recognizable from these alone, but Dan the Ad Man focuses on the animation of their signature moves to bring the forms to life (check out Chun Li’s Spinning Bird Kick). Each character’s movements are extended and energy released in a fluid manner, accompanied by familiar theme music and colourful explosions of geometric forms. (more at artsandsciencejournal)

That clearly drives us to this video’s inspiration – Forms..

a collaboration between visuals artists Memo Akten and Quayola, a series of studies on human motion, and its reverberations through space and time. It is inspired by the works of Eadweard Muybridge, Harold Edgerton, Étienne-Jules Marey as well as similarly inspired modernist cubist works such as Marcel Duchamp’s “Nude Descending a Staircase No.2″. Rather than focusing on observable trajectories, it explores techniques of extrapolation to sculpt abstract forms, visualizing unseen relationships – power, balance, grace and conflict – between the body and its surroundings. (more on Forms’ Vimeo page)

Both these videos – especially Dan the Ad Man’s – remind me of the fairly obscure 3D turn-based indie fighting game TORIBASH – definitely not as appealing as these vids but equally abstract. requiring you to find multiple ways to circumvent expectations of your enemies. Here’s a trailer. You’ll be thrilled. 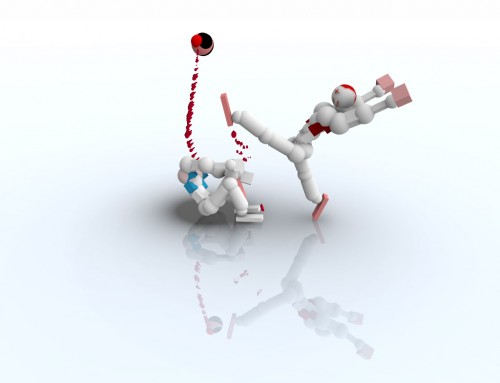