“The aim of the rubix project was to develop an animation that described a conceptual tool for deploying these malleable virtual environments that could be used by their creators to shift space around us. The rubix concept stemmed from the need for an algorithmic formula for controlling the use of redirection techniques; it allows for many different spatial combinations whilst a level of control is constantly maintained. In the animation the initial Escher-esque space is a representation of our perceptual system where huge amounts of information arrive in the brain from multiple streams. The process of perception involves the brain selecting and rejecting contradicting pieces of information leading to a perception of reality that only gives us glimpses into the world we are in.” (more at TARDIS: Architectural Thesis)

I’m actually more supremely impressed by Chris Kelly’s thesis than his movie accompanying it. Rubix, his five-minute short deals with malleable, almost fabricesque qualities of urban spaces, shifting our perception, turning ready-made buildings as hindrances or signposts of attention into trenches of possibilities and absences of space to fill. I’m definitely nowhere near professional architecture, but I’d say reallocation of urban space has already been an important factor, especially in Japanese destruction porn anime/manga (wherein architecture itself is endowed with a phoenix-like constant resuscitation) – and that destruction is apparently mirrored in recent superhero movies like The Avengers or Man of Steel. 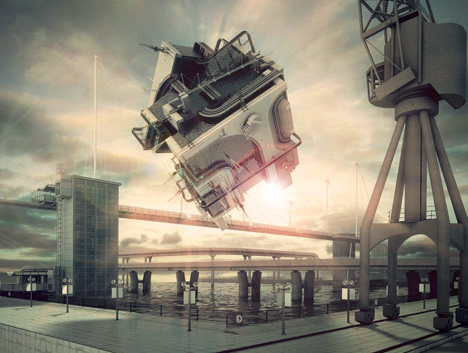 Folding (or real-time manipulating) urban space is not an old trick in mindbending SF: we’ve had Dark City, Inception or even The Matrix dealing with that issue and demoscene products are also abundant with swirling cityscapes (as it hits you conceptually as much as visually and that procedurally generated process is not just kinky, it’s quite crunchable) – and parkour’s obviously something of a mindset we cannot overlook. And, oh, do you remember Bruce Branit’s brilliant VR-melancholy piece World Builder?

This obviously doesn’t mean for one single second that you shouldn’t shove your face into Rubix – it’s infused with Avalonesque sepia sadness and some Brian Eno, if I hear it right. Brilliant work and I’d love him to work on some mental, mental conceptual work for a mental, mental video game. But check out his thesis on Issuu (godly PDF), it’s mouthwatering.