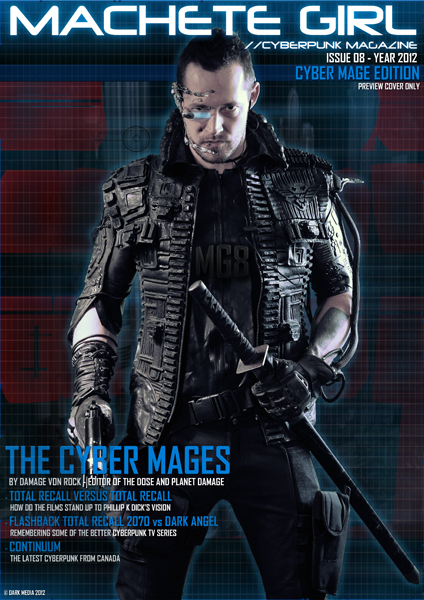 I’m watching people fuck other people looking like cars in a shabby little hut somewhere in the Philippines. Bears eating salmon, and occasionally, each other, near the Brooks river, Alaska. The surface of Mars that looks just like Tatooine, and in a few years, a landscape most possibly LEGO’d out of Starbucks and Wal-Mart, hot items of the American terraforming industry.

Hey. Long-distance runner cyberpunk magazine Machete Girl is right before releasing its issue no. 8. focusing on the concept of cyber mages and I just happened to write the lead feature in it. Thankfully you will have a great number of other articles carving out bad veve out of your head (on Total Recall, Continuum or Dark Angel, just to name a few) and it’s also the very first issue with a male model. Until you’re waiting for the free PDF download of this issue, head over to their site and also check out previous episodes of Machete Girl TV! ROCK!

I leave you with one more thing to ponder on. There is a well-known and much acknowledged ceremonial magick practice known as the Achieving the Knowledge and Conversation of The Holy Guardian Angel. Which is strange, because I’ve just checked my Google History and just spent 200 bucks on a psychological profile and a statistic forecast for the upcoming six months based on my OpenGraph.

So I’m pretty much done conversing.