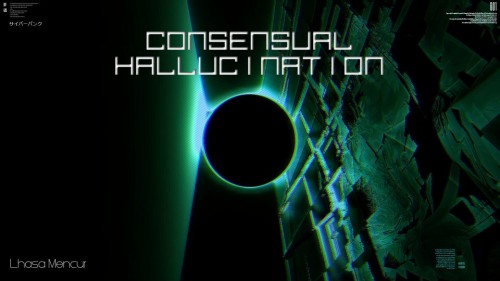 Debut solo venture from London based sound artist Lhasa Mencur – an exploration of luscious textures, razor sharp melodies and meticulously crafted glitches and beats the EP aims to take the listener into an uncertain future with its subtly underpinned cyberpunk inspired narrative and vivid ambient spaces. Also featuring as the official OST for upcoming game Dirac.

Lhasa just tagged this as cyberpunk on SoundCloud and BandCamp and that’s just spot-on – his debut EP running along with Cybo and earlier Hecq and hitting the moods with many of the artists we came to love for their paragliding above neon Moscow (that would be Tympanik and Hymen). Grab his 3-track glitch-ambient EP Consensual Hallucination off BandCamp – that also serves as a soundtrack for a soon-to-be-released multiplayer game called Dirac (trailers #1 & #2). And this just got released on my birthday. Which makes it even a more pressing matter for you to download it in no time.