This is the International/UK trailer for Ridley Scott’s almost-Alien-prequel new blockbuster PROMETHEUS. Below is the generic trailer with a few press release story markers and a set of extra Alien/Giger heels for the ladies’ pleasure (via boingboing).

Ridley Scott, director of “Alien” and “Blade Runner,” returns to the genre he helped define. With PROMETHEUS, he creates a groundbreaking mythology, in which a team of explorers discover a clue to the origins of mankind on Earth, leading them on a thrilling journey to the darkest corners of the universe. There, they must fight a terrifying battle to save the future of the human race. (…) In the distant future, two superpowers control Earth and fight each other for all the solar system’s natural resources. When one side dispatches a team to a distant planet to terraform it for human colonization, the team discovers an indigenous race of bio-mechanoid killers. (…) Cast: Charlize Theron, Michael Fassbender, Noomi Rapace
Release Date: June 8, 2012 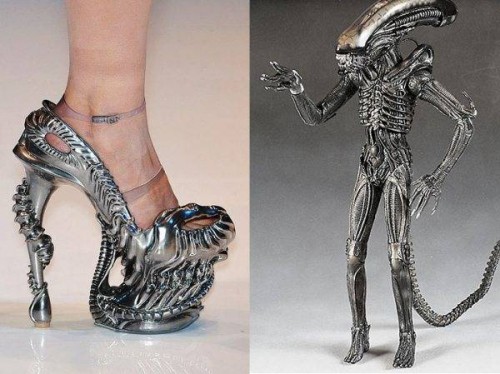