MENTALLO & THE FIXER ARE PSYCHEDELIC INDUSTRIAL MAMMOTHS! One of the bands that really defined my whole musical likescape and interest was the splatter-industrial work of Dwayne & Gary Dassing and now they’re releasing new stuff in 2012 – one is the 4CD compilation that’s pimped by this morning’s Alfa Matrix newsletter (released April 27th) and the other’s the new LP entitled Music from the Eather, coming sometime this summer. If you want to know more, why don’t you check the interview I made with Gary into The DOSE mag? 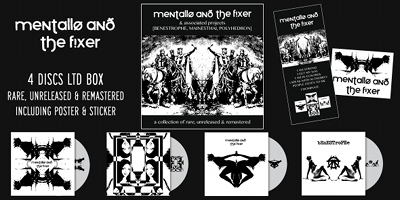 Brainchild of the two Texan brothers Gary and Dwayne Dassing, MENTALLO & THE FIXER is definitely one of the most influential American electro/industrial bands of the last 20 years. Highly emotional and complex, their music is characterized by snarling distorted vocals, hard cutting sequencer rhythms and a thunderous beat. Always projecting himself into the future, Gary Dassing has throughout his career, constantly been reinventing his sound, offering an impressive list of avant-garde electronic music releases on renown labels like Zoth Ommog, Metropolis Records and Alfa Matrix.

After a catharsis of another 5 years of silent isolation, MENTALLO & THE FIXER is now ready to delivery to their faithful “old-school” fanbase a massive special 4-disc box set collection gathering over 50 tracks: mostly exclusive and previously unreleased material spanning throughout the years back to 1987 until 1996. There is much from the Zoth Ommog era of MENTALLO & THE FIXER and even prior to that, the set also includes several projects the Dassing brothers had along the way: from POLYHEDRON through MAINESTHAI or yet the first full length BENESTROPHE demo tapes, much of which has never been released or even heard. “I like the demos much better, they sound more raw.”, Gary Dassing says. (for more info and tracklist, go alfa-matrix.com)