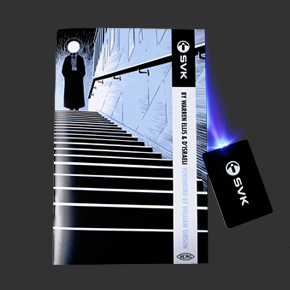 SVK is a healthy transfusion of Cherenkov light and battery acid blood into the heart of the comics industry turned a tad uncogged and shambling. Warren Ellis, misanthropic PCP godhead of the hard-edge counterculture, Matt D’Israeli Brooker (with art and inkery dipped into Judge Dredd, Future Shocks, Sandman or Kill Your Boyfriend) and London-based design agency BERG stands behind this shoulder-mounted package of sheer ROCK and a whole lot of Easter Eggs, turned into something of a cheeky prodigal bastard child.

Ellis calls SVK a Kafkaesque Bourne Identity and he has truth, revealing emerging issues of data clouds, information leakage, surveillance and active lens technology through an object called SVK (quite similar to the prototype in Gibson’s Virtual Light) and the eyes and actions of Thomas Woodwind, an Ellisesque protagonist of a troubled professional background, a blood-spangled mercenary mindset and a hacker sidekick to make a contemporary spy story look straight enough.

The greatness? The issues breathing down on your neck and those same cards played out in the narrative to get the creative cells going. The idea of multiple layers of narrative -reading the comic is one thing, then reading it again with the SVK (strategic vigilance key) object – a branded one-shot blacklight – will reveal extra facets of visual and contextual elements to combine back into the big picture. The foreword praise by William Gibson. The extra know-how ramblings by Jamais Cascio and Paul Gravett. The hilariously brilliant ads from breeding pygmy elephants to DNA-altering trousers, 4D printers and cerebellum plugins that will teach you Japanese in just 30 years? This is just like reading your first mind- and brain-altering comics under the blanket with a flashlight. Only this is the futurepast and only blacklights will do.

Get your copy of SVK and its designated weird little reader card before it’s too late.