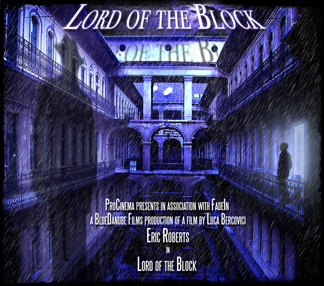 This just came in via @Dawe_, our courier of fast cars, fast conspiracy theories and news of importance. BlueDanube Films (apparently based in Budapest, Hungary, so I gotta make some exclusive backstage shots and interviews while I’m still in the city!), a relatively new film company that plans to create micro-budget films (the PRlog mentions 500K-1M euro budgets, is that actually considered micro?) is now working on Lord of the Block (see stuff below) that features Eric “Maroni survives fall, walks away with broken knees” Roberts, script’s worked on by Balazs Lovas (Run to Ground) and Gabor Krigler (Born Loser). Curious to hear more about that one, stay vigilant, brothers! (via prlog)

“Lord of the Block” is a dark urban mythic thriller about a disaffected young man’s discovery of a man-like creature living in his apartment building. The creature/man named “Artur” seems to be able to control the emotions of the apartment inhabitants, feeding off of their negative emotions. Although initially entranced by Artur’s abilities, and the fact that Artur wants the young man, Tomi, to become Artur’s apprentice, Tomi finds himself in a battle against the “Lord of the Block”, and the darkness that he stands for.