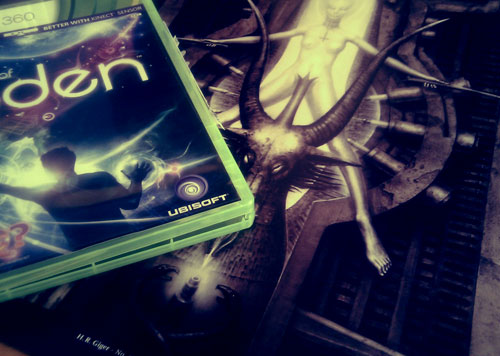 Hello, fellow readers, friends, haters and everybody else who just popped in to hide from the rain SUN death. A brief non-automatic note from The Damage: it is summer, people wear significantly less clothes in the asphalt jungle and they smile more. AND I took up biking. So halving my time online has never been easier. I’d like to finish that book of mine the soonest (about cyberpunk, pop culture, the future and other random things of high intensity), so I killed my habit of posting the half-drafts, ergo: even less content. (That’s another thing that everybody’s writing a book nowadays but hey. Age of whatever is coming.) Child of Eden got released on June 17th: one of the best IPs Japanese cyberpunk ever produced. (EVER.) Consequently: even less content. I think I also started to diversify my channels, so I post a lot of things on Facebook and Twitter as well – follow me on either or both platforms. No promises this time: writing will always be good but as long as I’m not getting any inspiration, motivation or a tinge of ROCK SUCCESS out of whatever I’ve been doing, I’m trying something else to take my brain off the hook and keep myself relatively sane.

Sealing all this with a great summer drum’n’bass track by Child of Eden soundtrack producer virtual idoru band Genki Rockets (the Sunrise remix on the Heavenly Star EP). (I also gave much thought about completely redesigning the blog. Still looking for a Hilariously Huge and Powerful Coffeemug of ROCK to kickstart that whole project.) But I’m away to fuckoffery, far from the interwebs. I might also take up nyan shuffling, its level of disturbing reality on so many levels is unparalleled. Thank you. This was and always will be as long as I don’t forget to pay the domain fees planetdamage.com.