Planck is a new type of music game that’s not predicated on your skill at shooter mechanics or timed button presses. Instead, Planck allows you to explore brand new compositions in an interactive format.

In the strange Planck universe, everything is made up of small particles known as “motes.” Each mote is contains a unique signature vibration– its wave form.

The wave form of each mote can be released by collapsing its wave function, otherwise known as “pinging” it. By pinging many motes in succession, you can create repeating structures of sounds.

As you choose to release certain types of waveforms, the space around you responds to your actions, sending you new sounds to add to your musical performance that relate to the direction you’ve chosen! (shadegrowngames.com, via igf.com) 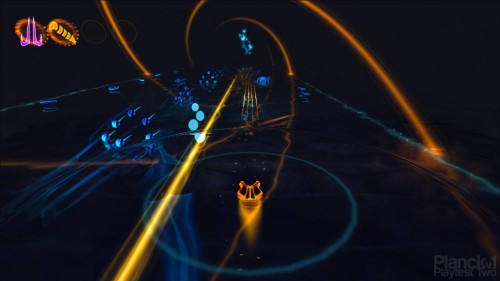