Adhesive Games is developing a new Mech Combat FPS. All clips in this video were captured from actual network game matches. The third person shots are from a spectator camera, gameplay is first person. We expect to release a first person gameplay trailer soon. (via hawkengame.com)

This is practically everywhere on indie game sites, normal game portals, mech fanatics (and I think Ripla and Tlvlp also sent me a note about this) and people who love a decent engine-based tetsuo fuckromp across a steel sky dented with dead neon ads and a decent green tint, meaning all is lost but we still have enough fuel to get your ass kicked. And the excuse in the top left corner about this build not representing the full quality of the alpha? Giive me a fucking break there. I’d be so content with having this game in its state on my 360. One thing, though: I miss the claustrophobia of a living humanoid grave prosthesis. Make it more closed and more tense, like the original Mechwarrior 2. Seriously. 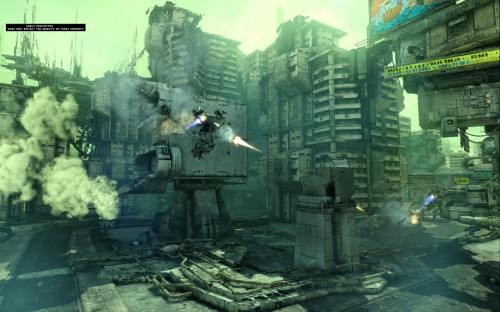