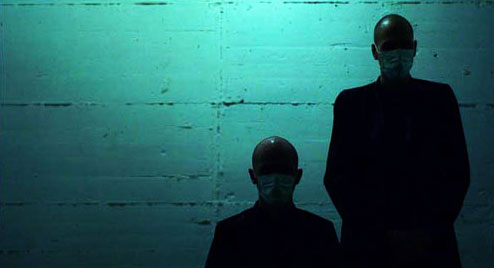 The 10-15 minute film is nightmarish vision, and a dark tale of a fictional and threatening future. This mentally multi-layered scheme was preceeded by a two year collaboration between the players in research, consultation, and in writing the screenplay. The main character of Diogenides is played by Péter T. Zselensky, who in real life is confined to a wheelchair. The screenplay makes use of several events that have occurred in his life. The film combines several realistic events with certain surreal scenes to create an indivisible whole.

Got to know about Bastards, a mystic experimental short movie via a long-time reader of this site, Zsellerm, whose mail about the engimatic circumstances and people behind the movie only make the production more intriguing. And looking at the teasers (and you can find more on the Youtube profile of director Tzafetaas) you will regret about no further word being out about this movie. Dug this up from the bookmark list and I’m promising you to get more info about this ASAP. Until that, spread this like wildfire!

The film is a nightmarish story. Maximilian is a human monster who creates monsters in his own image. Maximilian needs a heart. He orders his creatures to find one. Diogenides, a philosopher hermit, lives his life in a wretched little house, confined to a wheelchair. Old, dilapidated furniture, a decrepid television, and an ancient computer. The internet is his only connection to the outside world. One night he cannot find any of his friends online on the usual social sites. After a long search, he comes across an unusual profile. A bald man, photographed from behind. Suddenly he turns around. His face is covered by a mask. His look, the mask, and the uniform-like clothes, all create fear. It looks like he is alone, but he is not. Two cyborgs in a nuclear bunker. They look almost identical. They are Maximilian’s footmen, the Cleaners. The creatures of Diogenides and Max find each other, and begin to chat. The Cleaners locate the philosopher using hi-tech machines. They set out to get his heart while keeping him busy chatting. They arrive and start to work. The Cleaners destroy the realistic world of Diogenides, plunder his mental and physical values, and then leave.