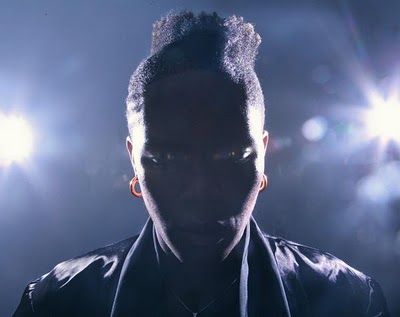 This is the raw, real stuff right here, hearkening back to ultra-early Ministry, dance hall Cabaret Voltaire, or any of 4AD’s most toothsome output from back in the day. Think Ian Curtis at his most tuneful, Grace Jones at her most carnivorous, or Clan of Xymox with roid rage… (via @coilhouse)

Exactly. This is the best new stuff I’ve heard so far this year (Phurpa was last year, remember?) – even though I’m currently running in a jungle full of Sleep Chamber, Igorrr, Battle of Mice, Tzolk’in and The Irrepressibles -, so much like the night when your mascara’s running, you’re crying, clutching desperately into a doorbell that will never answer and the cigarette never meets a lighter in your Schwartzschild radius and you desperately clasp the stranger that gives you the light as you’re hiding from the rain and you forget the name like anything in the past year when your heart wasn’t working and it’s never really working at all and then you’re fucking raw, biting the pillow as it bleeds back and you’re scraping yourself in the toilet, hiding below the sink, scrubbing a heatmap of desire off your skin until you’re sore from the outside as much as the inside and the emptiness has a name and Nietzsche’s might just have been a heartstruck boy as he wrote all that stuff about the abyss but it’s a new day and the doorbell’s never answering. It’s that kind of music. Bon fucking appetit. (Genius music by the way, Shannon Funchess is a goddess.) (facebook, myspace, official site)