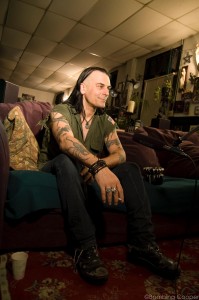 This is the 2nd official trailer for the full length documentary film “Living the American Nightmare”. This is a film about what it costs an artist to be themselves, and what they get in return.

The project speaks in length about the career of Myke Hideous, an artist, song writer, and vocalist for “the Empire Hideous”, “SpySociety99”, and “Bronx Casket Company”. In 1998 he briefly realized his dream by singing for the legendary punk band, “The Misfits” only to have his experience blow up in his face.

Music for the trailer written, recorded and preformed by Myke Hideous for the soon to be released “The Time Has Come” album. Film set to be released later this year. (via coilhouse)