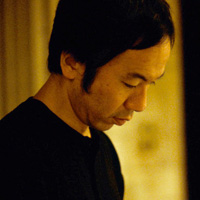 Made by Tsukamoto Shinya as the first-ever station ID for MTV Japan, this video was called “TOH (Top of the Hour)”. It was used from September 1993 til August 1994.

So far, a number of famous film-makers have made the TOH in the US. This time – exclusively for MTV Japan – Nine Inch Nails, who had been asking Tsukamoto to do their promotional video, penned the music. With this familiar melody [sic] by NIN, the video almost feels like a scene from the movie Tetsuo.