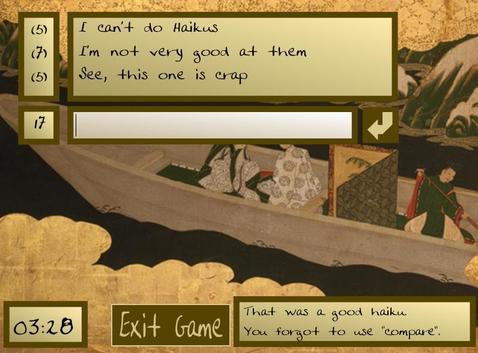 There was a whole week when we only communicated via haiku, all the guys on IRC on our secret channel, not so secret anymore, a handful of eager, vibrant bodies bursting with hormones, smartness or an unlucky combination of both, handful meaning something close to thirty people. There was even a saying if you cannot say it in seventeen syllables, it doesn’t exist. I know, because I made it up. And I still approve. And here’s this game now, Haiku Hero, giving you a chance to boost your haiku writing skills on the clock – be fast, be sure to include certain words or avoid certain letters – great stuff. Put in on a Chumby, port it to a damn Android app! (Haiku Hero, via indiegames.com)