Jeunet and Caro’s trademark of magical realism pervades all genres they touch from the grotesque to hard edge science fiction. Their obscure first short, Le Bunker de la Derniere Rafale (available on Vimeo) appears in 1981 when Besson is having a comic liaison in a depressing future with no women. Incidentally Le Bunker has only bald males with a thankful infusion of goggle porn, concrete and claustrophobia with a countdown. Which sounds way too much like the last few months of 2012 in the cybergoth scene, but sssh! (:Wumpscut: also touches back to Le Bunker in his early days – anyone remember Bunkertor 7?)

Yes, more movies to come your way and this time it’s early French hard-chiseled weirdness. Jeunet-Caro’s first short The Bunker of the Last Gunshots is online on Vimeo and if you liked it, click up The Dose mag and order the mag (yes, we actually made that) for 4 EUR for more French cyberpunk and link and lovely perversion galore! 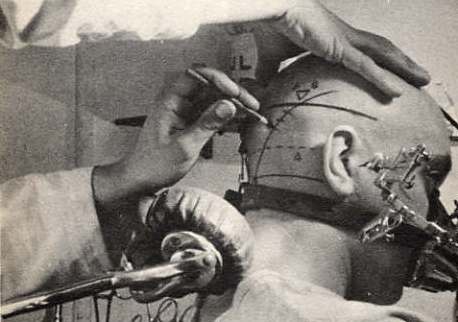