Just talked to Meikee Magnetic and he referred me to a girl duo I regrettably haven’t heard of. Yet. The gothloli pop duo of hANGRY & ANGRY comprises two 4th generation Morning Musume members (okay, there’s a reason why they eluded me so far, heh), 吉澤 ひとみ – Hitomi Yoshizawa (hANGRY) and 石川 梨華 – Rika Ishikawa (ANGRY) and if you ayrtonsenna your precious headmeat into the Top Secret video (above), you’ll treat yourself all too well, that’s some quite decent Jpop material and most probably their catchiest and cheesiest hit so far. Apparently, according to Wikipedia, they’re on a payroll of a Harajuku fashion store of the same name, so they’re basically a promotion unit. 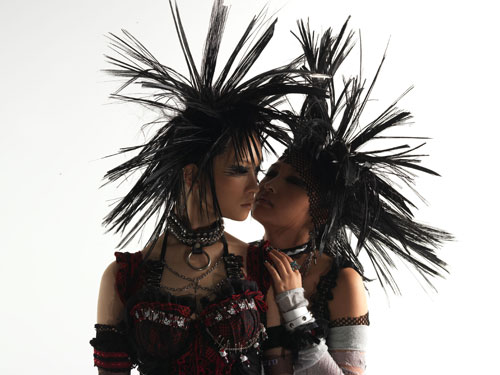 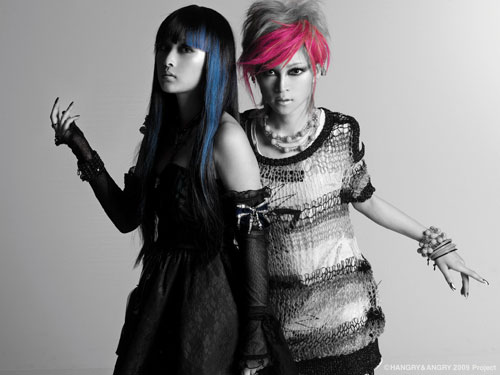 Hangry & Angry is a brand of popular Japanese designer h.NAOTO. Illustrator GASHICON draws the gurokawa (grotesque-cute)-style characters “Hangry” and “Angry” who came from the H44 Star Nebula in order to save the world from global warming. They arrived in the present in their time machine dubbed “LOVE MACHINE.” (via japanfiles)

And while you’re busy clicking your way around the ladies, be sure to check out Gothuall label they released their first mini album on and the other band on it called GaGaalinG, that might be a kick for all you people out there into the lighter side of J-rock like Danger Gang and exist†trace – this band is actually fronted by MAIMING, a model you could mostly see in the Harajuku fashion mag KERA.