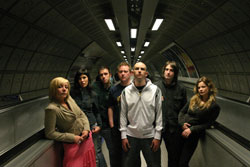 With it´s uncompromising mix and blend of sounds and styles Audio Damage straddles hip hop to soul via breaks; a musical work out to challenge those with leanings in any genre. Best known for their remix work, Future Funk Squad had their breakthrough with a remix of club classic Raze – Break 4 Love. Head honcho Glen Nicholls, the producer/mastermind behind it all, has done remix work for such diverse acts as Moloko, Mint Royale, Lamb and The Stanton Warriors. Most recently he remixed the massive Mylo tune Drop the Pressure and Spitfire by his heroes The Prodigy. (via progressive sounds, future funk squad on last.fm, future funk squad on myspace)