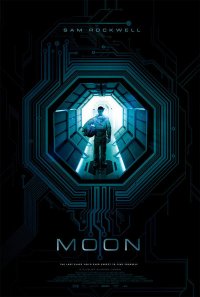 Debut SF movie Moon directed by Duncan Jones is a well-executed ballistic hadouken. Get the cards right: the son of  David Bowie drops a movie inspired by 2001: Space Odyssey and Blade Runner about how a 3-year long Moon maintenance job can turn into a nightmare in the last two weeks – including a weird doppelgänger, Sam Rockwell and a computer voiced by Kevin Spacey and a set designer from Alien, who’s obviously not onscreen. But I surely digress.

The film’s screened at Sundance this year, also in Los Angeles and New York on the 12th of June, Sony Pictures Classics starts commercial distribution from June 2009. (via io9)