Full immerson body suits, you say? After generations of suits that looked like half a ton of cables so thick that could even give a hard-on to a veteran sailor, up-and-coming Kobe artist Noriko Yamaguchi is back (was back in 2008) with a new approach: cell phone keypads, wires and a pair of headphones. During the performances of her project Keitai Girl a phone number was linked to her suit / visitors could dial up the suit and talk to her. All this with Butoh makeup and being a “walkting and talking cellular device“. But in all honesty – aren’t we already are? (brief parapara video featuring Keitai Girl)

The art world in Japan has already recognized Yamaguchi as an up-and-coming talent: in 2004, she was selected by famed photographer Hosoe Eikoh as a recipient of the Panel of Judges Award at the 21st-Century Asia Design Competition award held by the Kyoto University of Art and Design and again by Morimura Yasumasa as a winner of a young artists’ competition hosted by the Osaka Contemporary Art Center, as said by Eric C. Shiner. 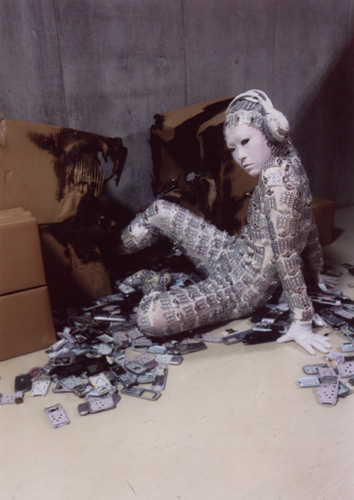