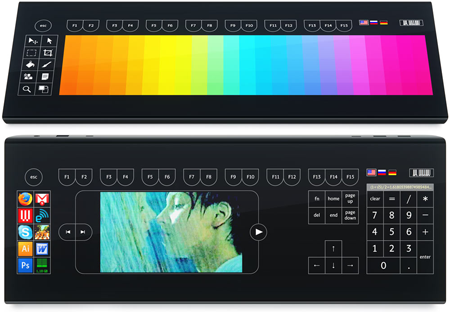 Artemy “Optimus” Lebedev is back with another concept for a new-gen keyboard, the Optimus Tactus. Not yet haptic, the keyboard is actually bestowed with an iPhonesque touchscreen capability, meaning most of the user-ended design issues are basically on the interface side: buttons can be any shape and size, making this a wonderful addition to Supple++. If you hadn’t known Supple++ before, that’s basically a software support system for users living with motoric disabilities – they are given tests (they have to click, drag and do various other tasks with the mouse) and then the whole Windows interface changes according to their limitations, e.g. if they have problems dragging the cursor through the screen, the distance between buttons diminishes. Imagine the same thing with the Tactus. Amazing. (via gearfuse)

P.S.: And as for the lesbian lolitas, they are obviously T.A.T.U., so grab this, Nas ne dagonyat, from the first LP.