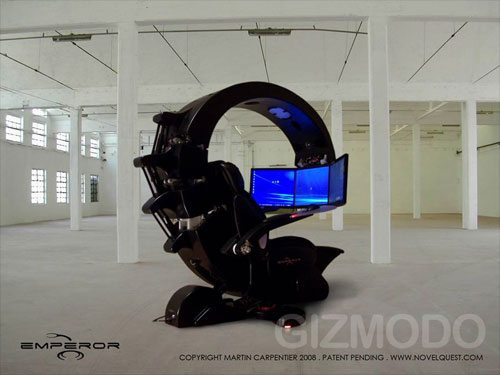 Every single site from Gizmodo to Ubergizmo thinks that the Emperor workstation mod by NovelQuest has something to do with the Star Wars Universe. Nothing about neural induction links and operator HQs, obviously.  As for the specifics, those will be released on the 24th of July. I am so ordering one of these. As you can see, it has three monitors, also surround sound, air filtering, light therapy, webcam and battery backup. I can’t also miss saying,

At the press of a button, the Emperor’s tail section (the large articulated arm that holds the monitors) rises to allow the user to be seated, then lowers back into position the three monitors at the perfect height and angle for perfect viewing comfort.

Yes, yes. Everyone added this as blockquote. (Link sent by PinkTsunamii, thx)