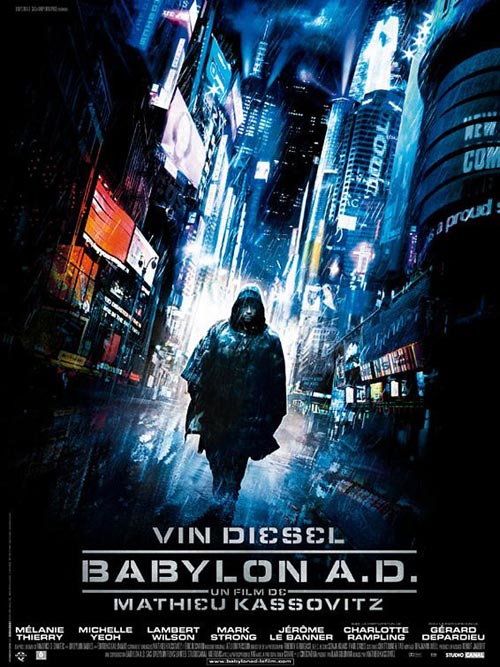 Goddamn meme splicing, goddamn ignorance! Always thought the new Kassovitz movie “Babylon A.D.” is based on animé – whereas it’s a screen adaptation of French quasi-cyberpunk novelist Maurice G. Dantec‘s most cyberpunk stuff (or at least that’s what Wikipedia says) Babylon Babies (apparently this is also available in English if you wish take the preliminary reading course and reader comments diss this). It has Vin Diesel, Michelle Yeoh and a synopsis of

Veteran-turned-mercenary Thoorop takes the high-risk job of escorting a woman from Russia to China. Little does he know that she is host to an organism that a cult wants to harvest in order to produce a genetically modified Messiah.

that sets a few Christian triggers in your mind if you’ve read reMix by Jon Courtenay Grimwood (which you probably haven’t, but anyways). Kassovitz presents the movie with a sheep-eating grin and although in itself the trailer doesn’t have anything interesting except for a few shots of Diesel and a hearty explosion, it satisfies our hunger well.

According to an earlier report of Twitch (our torch in the times of dire need), following up on a rumour of Fox mangling the international version of the film – the original will not be 160 minutes, as Kassovitz said this as some sort of a joke (a bad one, indeed) and the European cut in 105 minutes long (whereas the fuller one appears to be two hours long if I understand this right).

Movie stills are available from both IO9 and SFCool. (via)