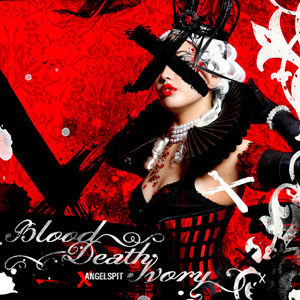 Sydney-based duo ANGELSPIT (also inventors of rock) just started releasing digital snippets of music and artwork to promote their new album BLOOD DEATH IVORY. The album – which, according to one of the band’s blipverts – elaborates on the concept of beauty, that much we know – also available is the complete track list and now we have the first “bloodpack“: an assortment of one new track (Skinny Little Bitch), a wallpaper and a 10% discount web sale voucher. (Bloodpack available here, voucher’s valid from 01/05 until 15/05.)

Album design is done by DestroyX, photography by Helen White (who also did the sleeve & artwork photography for Krankhaus, so that’s a promise in itself) and you can expect more slashing surprises in the upcoming weeks. Skinny Little Bitch is one motherfucker of a stomper much in the vein of Angelspit and will probably be one nice addition to the live repertoire – one thing I really miss is some cringing lines of 303 and some more distortion!