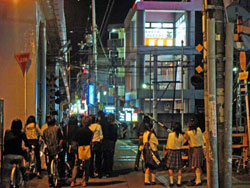 2008 summer: another Mirrorshade icon hits the market. Black Glass – originally a co-op novel of William Gibson and John Shirley – is published via Elder Signs Press, finished up by Shirley himself. As Shirley states himself, this is both a Lost Cyberpunk Novel and “a pulp of new ideas”.

The excerpts are published in FLURB, an endearingly oldschoolish fanzine of another author of the Mirrorshades fame, Rudy Rucker. (link)

They’re putting Candle’s mind back in his body. They’re letting him out of prison. Today.

Grist lay on his back, re-reading the message looping across the ceiling screen; Lisha kept on working, straddling him, keeping his dwindling maleness locked inside the intersection of her womanhood, gazing down at him with a practiced simulation of reverence. She was used to Grist reading and phoning during sex.

He read the message again and, wanting to keep his erection, he continued moving his hips, trying not to break rhythm…

You want to keep it up, don’t think about Rick Candle.

He’d penciled this bedding into a busy schedule and he didn’t want to waste it. Lisha was expensive—everything about her. Even her face, which he’d paid for: Grist was in bed with himself.