More info on one of the most hyped cyber/biopunk movies in the past few years. I spoke to Pearry Reginald Teo, director of THE GENE GENERATION and he confirmed that they’re “working on distribution rights in different countries/regions and the comics will be out in March“. 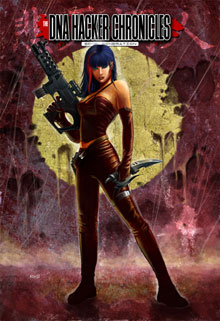 Which directly leads me to the point – there is a visual supplement to the movie itself, although I’d say that after having waited more than two years for the release, it’s more of a teaser until the DVD release than something we could rightfully grab as a stand-alone comics. Still.
The DNA Hacker Chronicles are released by Bloodfire Studios and as far as the official press release goes, the comics will delve deep into the DNA hacking aspect and readers will have to solve puzzles and break codes while reading the story – which is a brilliant idea in itself. Expect three issues (Genesis, The Suffering, Blood Alliance) this month. Unfortunately the last trailer hit YouTube some ninth months ago and the latest thing on MySpace is Bai Ling arrested at the airport for some pretty theft (which is more like forgetfulness and misdemeanour, they say).