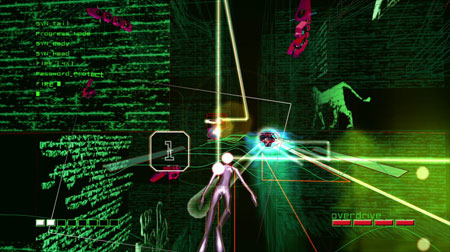 And if you don’t have Rez, my goodness, what you’re missing! The masterwork of maverick designer Tetsuya Mizuguchi, Rez is to shooters what Mizuguchi’s later Lumines is to falling-block puzzles. Everything flows to the beat of the game’s awesome techno soundtrack; you lock on to enemies then let go of the button to let your fire fly, they explode to the beat of the music. As you progress through the levels, the music goes from a simple back beat and a few rhythmic beeps to a dramatic multi-layered piece, and the vector-line graphics get more and more intricate as well. (via boingboing)